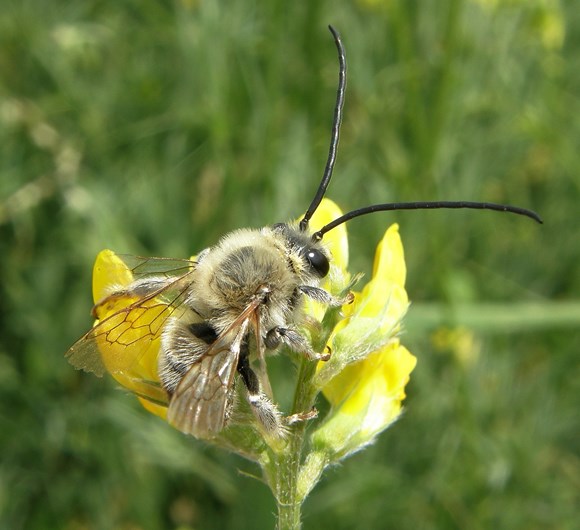 Buglife are excited to announce the results of the recent National Bug Vote and are pleased to note there appears to have been no electoral malpractice or hanging chads. Bees proved extremely popular wining the contest in two of the four home nations and runners-up in the others.

In England the vote was comfortably won by the Long-horned bee which won over a third of the total votes cast. Perhaps the biggest surprise was the Seven-spot ladybird languishing in third place having been strongly fancied to win over the first few days of voting.

The Long-horned mining bee is so-called because the males have impressive and exceptionally long antennae.  This wonderfully furry bee is one of Britain’s larger solitary bees.  It was formerly fairly widespread in southern England, but has suffered massive declines and is now largely restricted to the coast.

Andrew Whitehouse  from Buglife England said “It is really fantastic to see the Long-horned bee voted in as England’s favourite invertebrate.  The long-horned bee is definitely one of my favourite bees, it can be seen at this time of year in my local patch on the South Devon coast.  The Long-horned bee will be a great ambassador for all of our pollinating insects.”

In Northern Ireland the poll was topped by the Irish damselfly which gained almost 40% approval over a tie for second between the Northern colletes bee and the White-clawed crayfish.

You know that summer is here when you spot dragonflies on the wing! The Irish damselfly is active in the early summer months from late May to July.  Irish damselflies are found in Ireland, but not in Britain for start.  And this is a good looking insect – the males are have a blue and black striped body, and a bright green underside to their head and thorax, the females are less striking and are more green than blue.

Scotland was a buzz for the Red mason bee which edged the Green tiger beetle despite a late surge of votes almost entirely pro beetle.

Found in gardens, churchyards and parks from March to July, this common species of solitary bee visits many different species of flower and is important in pollinating fruit crops such as plum, pears and apples. These bees nest in holes in walls, hollow plant stems and also garden bee hotels!

In Wales the competition was quickly wrapped in a web as the Fen-raft spider spun to victory with half the total votes cast. Only the Ashy mining bee even managed half the vote of Britain’s largest spider.

The Fen raft spider is one of Wales’ largest and rarest spiders, reaching up to 23mm in length. Female fen raft spiders are good mothers – they carry an egg sac with them for approximately 3-4 weeks before weaving a nursery web where the spiderlings hatch. The mother spider will stay near the nursery web to protect her offspring until they are big enough to fend for themselves. Fen raft spiders live around the margins of pools and ditches and are able to hunt above and below the water surface. In Wales they are only found at Crymlyn Bog NNR and along the Tennant Canal.

Whilst the beetles are left to lick their wounds particularly the pre-contest favourite the ladybird the four wining species will soon be gracing the cover of Buglife’s 2017 annual review and individually be the front for a new series of membership recruitment leaflets.